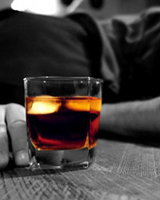 If you’re visiting the NCADD website to find out about alcohol, you are in the right place. We have chosen to have a separate section about alcohol because it is our most commonly used drug and it represents our number one drug problem.

Ethanol, commonly known as alcohol, found in beer, wine and spirits (like whiskey, gin, scotch, vodka, etc.) is a psychoactive drug that has a depressant effect. Alcohol, consumed across cultures, often used to help and promote social interaction, is popular, generally accepted and legal.

However, for millions of individuals and family members, alcohol is a source of devastating pain and loss. Alcohol is addictive and the state of addiction to alcohol is known as the disease of alcoholism.

But, to begin to better understand alcoholism, there is a great deal we need to talk about regarding alcohol and it’s effect on the individual, the family and many of major problems faced by our society – crime, drinking and driving and in the workplace. In addition, we need to discuss the special role that alcohol plays in problems among women, veterans and seniors.

For some of the signs to look for about alcohol-related problems and alcoholism.

For information on connection between alcohol and crime.

For information about drinking and driving,.

For information on alcohol in the workplace and the Employee Assistance Programs (EAP),.

The Disease of Alcoholism

“An alcoholic is someone whose drinking causes a continuing problem in any department of his life.” – Marty Mann, founder of the National Council on Alcoholism and Drug Dependence, Inc.

Alcoholism: A Historical Overview
Although first use of the term “alcoholism” is attributed to a nineteenth century Swedish physician, ancient Romans recognized the difference between people who drank too much by choice and people who couldn’t control their drinking. Centuries later, the Middle English language distinguished between drunkenness and addiction to drink. And as early as 1784, Dr. Benjamin Rush, the father of American psychiatry and a signer of the Declaration of Independence, described habitual drinking as an involuntary condition, a disease caused by “spirituous liquors.”

But the Puritan belief that use of alcohol was immoral overshadowed the disease concept in America until the failure of Prohibition. Shortly before the repeal of the 18th Amendment, which outlawed the sale and manufacture of alcohol, the first edition of the American Standard Classified Nomenclature of Disease was published. It listed both “alcohol addiction” and “alcoholism.” Alcoholics Anonymous, founded two years later in 1935, also embraced the disease concept.

The scientific work of Dr. E.M. Jellinek – who developed a model of addiction to alcohol – further validated the disease concept, which gained much wider acceptance through the efforts of Marty Mann, the first woman to achieve sobriety through Alcoholics Anonymous. She founded the organization now known as the National Council on Alcoholism and Drug Dependence and mobilized hundreds of volunteers in communities throughout the country to help Americans understand that alcoholism was a preventable, treatable disease.

Today, the American Medical Association and the U.S. Department of Health and Human Services are among those organizations that promote policies or programs based the disease concept of alcoholism.

Defining Alcoholism
In 1990, the National Council on Alcoholism and Drug Dependence, Inc. and the American Society of Addiction Medicine defined alcoholism as follows:
“Alcoholism is a primary, chronic disease with genetic, psychosocial and environmental factors influencing its development and manifestations. The disease is often progressive and fatal. It is characterized by continuous or periodic impaired control over drinking, preoccupation with the drug alcohol, use of alcohol despite adverse consequences, and distortions in thinking, most notably denial.”

In 1992, the Journal of the American Medical Association published an article explaining this definition in greater detail, but generally speaking, alcoholism is repeated drinking that causes trouble in the drinker’s personal, professional, family or school life. When alcoholics drink, they can’t always predict when they’ll stop, how much they’ll drink, or what the consequences of their drinking will be. Denial of the negative effects of alcohol in their lives is common in alcoholics and those close to them.

Like other diseases, alcoholism is an interaction between the host (the person who gets the disease and his/her genetic and biological makeup), the agent (alcohol or other mood altering chemicals), and the environment.

There is no known cure for alcoholism. The disease can be arrested through complete abstinence from alcohol and other addictive drugs. Once abstinent, most alcoholics recover from the damage caused by their drinking. More than 1.5 million Americans are currently in recovery from alcoholism.

A Family Problem
Alcoholism is a disease that also directly affects others close to the alcoholic, particularly family members. These other individuals need appropriate help to recover as well. Effective alcoholism treatment programs include a family component and referrals to appropriate self-help support groups modeled on Alcoholics Anonymous’ (AA’s) twelve steps of recovery. Al-Anon and Alateen meetings are held in most communities for individuals who have been affected by someone else’s drinking. Children of alcoholics (COA) meetings are available in most areas under the auspices of Al-Anon and other twelve-step programs.

Recent research shows genetic and biological risk factors that make some people more likely to become alcoholics once they start drinking. Researchers all over the world are actively studying the relationship between these risk factors and the genesis of alcoholism. It has been shown that children of alcoholic parents are more likely to develop the disease than children of non-alcoholic parents. However, anyone who drinks can develop the disease and the most significant predictor of alcoholproblems Is the quantity and frequency of an Individual’s drinking.

How Can Someone Tell If He/She is Developing the Disease of Alcoholism?

The self-help fellowship of Alcoholics Anonymous holds meetings almost everywhere for those who want to stop drinking for any reason. Anyone is welcome to attend open AA meetings, although visitors are asked to observe AA’s tradition of anonymity. Al-Anon Family Groups—and Alateen for adolescents from alcoholic families–offer similar support for those close to an alcoholic. Local telephone books list these and other resources under “alcohol” and “alcoholism.”

As with most diseases, the sooner alcoholism is identified and treated, the better the chances of recovery. Some alcoholics do experience relapse during their recoveries and it is important to encourage them to return to abstinence as quickly as possible.

Can the Disease of Alcoholism Be Prevented?
Yes. The first step in preventing alcoholism is an understanding of the disease and awareness of the early symptoms. Recognizing that alcohol is a drug and that its use includes certain potential risks is a basis for personal prevention. Avoiding high-risk drinking, knowing your family’s history with alcohol as well as your own, and being familiar with sources of help in your area can reduce the chances of you or someone else suffering because of your drinking.

What Can You Do About Someone Else’s Drinking?
When those close to alcoholics stop trying to control the alcoholic’s drinking, the alcoholics often begin to see the harm their drinking is causing and become willing to accept help for their alcohol problem. Usually, those close to an alcoholic find it difficult to make these changes without some outside guidance. Help for them is available through NCADD.

Employee Assistance Programs (EAPs), Student Assistance Programs (SAPs) and family intervention programs are all based on the concept of using a professionally-supervised review of someone’s drinking behavior to persuade the drinker to accept treatment. These techniques offer new hope for arresting alcoholism at earlier stages. NCADD operates a National Intervention Network through many of its Affiliates.

Alcohol and Your Health
Federal law now requires that the following warning appear on all alcoholic beverage container labels: “Government Warning: 1) According to the Surgeon General, women should not drink alcoholic beverages during pregnancy because of the risk of birth defects. 2) consumption of alcoholic beverages impairs your ability to drive a car or operate machinery and may cause other health problems.”

The American Cancer Society has recommended that you should “limit consumption of alcoholic beverages, if you drink at all.” Similarly, the 1995 “Dietary Guidelines for Americans,” published by the U.S. Department of Agriculture and the U.S. Department of Heath and Human Services, state that if adult men elect to drink alcoholic beverages, they should drink not more than two drinks per day; adult women should not drink more than one.

A “drink” is a one and one-half-ounce shot of 80 proof distilled spirits (liquor), a five-ounce glass of typical table wine or a 12-ounce can of beer. For certain other kinds of liquor, wines and malt liquors, the definition of a drink varies because these products contain different percentages of alcohol by volume. Wine coolers also contain alcohol, a fact often missed by drinkers who may be confused by the advertising and packaging of these products. Similarly, some drinkers mistakenly believe that so-called “light” beers have less alcohol content than other beers. In fact, wine coolers and “light” beers may not contain less alcohol than other alcoholic beverages. Many wine coolers have more alcohol than a typical mixed drink.

The federal guidelines also advise that some people should not drink alcoholic beverages. These individuals fall into five groups: women who are pregnant or trying to conceive individuals who plan to drive or engage in other activities that require attention or skill individuals using medicines, even over-the-counter kinds individuals who cannot keep their drinking moderate children and adolescents

All states have established 21 as the minimum legal drinking age. Besides being illegal, drinking by minors includes other dangers related to their stage of development, inexperience with alcohol and “binge” drinking, a particularly alarming behavior reported in several surveys of children and adolescents.

Consuming alcohol in excess of the levels defined by the federal government is called “high-risk drinking.” It puts individuals at risk for developing alcoholism and increases the chances for other serious problems such as impaired driving accidents, domestic violence, sexual abuse, non-vehicular accidents, suicide and crime. Medical and/or psychiatric disorders also may be worsened by drinking.